Surgical treatment of brachial plexus injuries was initiated at the department of Hand Surgery in Stockholm in the early 1980’s, by prof. Thomas Carlstedt, with the assistance of Dr. Tomas Hultgren.

Prof. Carlstedt already at that time had a long background in experimental research on nerve injuries and nerve healing in the spinal nerve and spinal cord region.

The basic surgical techniques for repair of plexus injuries in the clinical setting; excision of damaged nerve tissue and reconstruction with autologous nerve grafts, had been developed by the pioneering work of surgeons in Switzerland and France in the late 70’s. Nerve grafting of ruptured spinal nerves is still the backbone of the nerve reconstruction but in later years additional techniques have been developed, which are used routinely today as supplements to “conventional” nerve grafts.

Our policy from the start has been to deal with the whole range of plexus injuries; birth lesions, as well as traumatic “adult” injuries and also to cover all types of surgical techniques; the various types of nerve reconstruction as well as secondary procedures. We have developed a wide network of collaborators from other departments; at Sodersjukhuset, at Karolinska hospital and Astrid Lindgren Children’s hospital, to cover the whole field of diagnostics, surgical treatment, postoperative rehabilitation and research.

The Plexus Injury Unit in Stockholm has served as a national referral centre for brachial plexus lesions since the mid 80’s, receiving patients from all of Sweden and also from abroad.

Our research projects cover a wide range of areas from basic research on nerve regeneration in the spinal cord and spinal nerves, to clinical studies on the impact of nerve injuries on limb development and limb function and the effects of various surgical procedures.

The nerve supply to the arm is provided by 5 spinal nerves which leave the spinal cord in the lower part of the neck. They pass from the spinal cord, between the vertebrae and out to the deep parts on the side of the neck, continue under the collar bone, then deep in the axilla and further on, spreading out in multiple smaller branches throughout the arm. The first part of the nerve bundle forms a complex network, a braid-like structure. Plexus=braid. Injuries in this region usually have a wide-spread and dramatic effect on the arm and can cause paralysis and loss of feeling in the entire arm and hand.

Brachial plexus injuries in adults are caused by high energy trauma, most commonly motor bike injuries. Other types of traffic injuries, downhill skiing and horse riding accidents are other examples trauma which can cause a plexus injury. Although the injuries occur at all ages, the majority of patients are in the early 20’s.

Associated injuries are common, such as ruptures of the large blood vessels of the arm, multiple fractures in the spine, rib cage, shoulder, arms or legs, head injuries, internal injuries in the chest or abdomen, etc..

Reconstruction of the nerve injuries should be undertaken as soon as the condition of the injured person allows, with respect to the general condition and other associated injuries that may have higher priority. Ideally ruptures of the brachial plexus should be repaired within 2-3 weeks or sooner if the conditions allow.

The basic principle for surgical repair of nerve injuries at the plexus level is to cut out the damaged areas and restore continuity in the nerve pathways by inserting nerve grafts that can bridge the defects where the injury occurred. With this technique it is often possible to restore good or useful function in the shoulder and elbow in adult patients. If the nerves bundles to the hand are torn apart in an adult person it is usually not possible to restore good hand function. 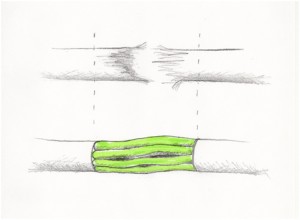 Shows a damaged nerve that have been cut and reconstructed with nerve grafts.

The brachial plexus birth palsy (BPBP) is an injury which occurs at birth, most often as a result of difficulties in the last stages of a normal but difficult delivery. The shoulders of the baby may get stuck when the head is already out, and then a certain amount of force may be needed to get the child delivered fairly quickly, in order to avoid a more serious injury – brain damage due to lack of oxygen.

This extra force in some cases leads to a partial or complete rupture of the nerve bundle to the upper extremity – the brachial plexus. This in turn causes a more or less pronounced paralysis of the arm.

The injury has been reported to occur in 1-3 per 1000 deliveries in Sweden and similar numbers have been reported from other countries. It does not at present appear possible to reduce the incidence below those figures.

Thus in this country approximately 200-250 children annually are affected.

Fortunately, in about 3/4 of the cases the injury is light and the paralysis resolves spontaneously within days or weeks. That leaves some 50-60 children annually in Sweden, who can be expected to get a more or less severe residual palsy.

The treatment in the early stages is to teach the parents a program of gentle passive motion exercises, in order to avoid contractures and to keep the arm supple, while the nerve function (and thus the active motion of the limb) recovers.

In severe cases, when the prospect for spontaneous healing is likely to be poor, surgical reconstruction of the damaged nerves is indicated. This surgery is performed from around 3 months of age and seldom later than the first year.

Residual symptoms are common, and include muscular weakness and impaired mobility, usually in the shoulder and elbow. In the more serious types of plexus injuries the hand function may be severely affected. In many cases when the function of the limb is impaired after the nerves have recovered, secondary surgical procedures are beneficial. These procedures serve to improve muscle function, to relieve contractures, or to stabilise joints. This type of surgery is often recommended for the patients with birth palsies and may be called for in the severe as well as in the less severe injuries.

The most common residual problem, requiring secondary surgery in BPBP patients, is a contracture of the shoulder joint, which causes the arm to be fixed in an inwardly rotated position. Characteristically in this condition, the child will raise the elbow in the air as the hand is brought to the mouth – the “trumpet sign”. This problem predominantly occurs in the group of children who have fairly light nerve injuries. Nowadays the deformity can usually be corrected with appropriate surgical interventions.

Other problems which may require secondary surgical correction are weakness of elbow flexion, inability to rotate the palm downwards, instability of the wrist joint, etc.

The majority of children with BPBP in this country are evaluated by a pediatrician, soon after birth and if necessary referred to a local pediatric habilitation centre. Those children who require evaluation for surgery are usually referred to us from around 2 months of age or older. Postoperative rehabilitation and training is not complicated and can usually be handled by the families themselves, in collaboration with the local habilitation centre.

The Plexus group will assist with recommendations, training programs and will also monitor and document the development of operated children